One of the most striking aspects of the discussion surrounding nutrition and “buying green” was about how we are lulled into a false sense of security and fulfillment based on the products we consume. In Michael Pollan’s book, In Defense of Food, and in this article by Jennifer McNulty, the idea of how we consume is explored and there are significant connections… Read more »

Due to my experience growing up in the emerging fast food industry period in Vietnam. Nutritionism is not only the problem in the United States but also in developing countries, Southeast Asia, Vietnam. Recently, Vietnam’s first McDonald’s restaurant officially opened in 2014, a vast of people lined up to try the most iconic American meal. The McDonald restaurants also offer… Read more » 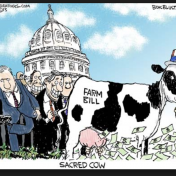 One of the glaring issues taken on by Michael Pollans book In Defense of Food is the problem of nutritionism or “a reductionist way of thinking about food.” In the United States we have become so caught up with what nutrients are in food that we are no longer paying attention to what food we are actually eating. This is… Read more »

Pollan’s book, while providing very tangible and well researched explanations about the shift in dominant food paradigms and practices across the world, is fundamentally flawed in one way: its applicability. Specifically, In Defence of Food, in my opinion, has blind spots at the intersection of nutritionism and class/economic status, and is subsequently racially flawed also. In Part III of the… Read more »

Welcome to our course blog! We are asking a lot of big questions:  Where does our food come from? What are the social, political and environmental roots and consequences of current agricultural practices? Who wins and who loses? To what extent are non-state actors altering the world political system? How is climate change likely to impact the world food system? What… Read more »