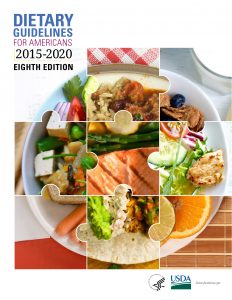 The 2015-2020 Dietary Guidelines for Americans is designed to help Americans eat a healthier diet. Intended for policymakers and health professionals, this edition offers 5 overarching Guidelines and a number of Key Recommendations with specific nutritional targets and dietary limits.

The American government has had a great effect on the food industry and consequently the people of the USA. Because of the industrialization of food and nutritionism the American government endeavored to change the diet of the whole population. Our government put guidelines in place to prevent people from overeating certain nutrients but with abstract wording as to not upset the meat or diary industry. From 1977-1982 the dietary guidelines were to “eat more low-fat foods.” People continued to eat their regular food and just added low-fat foods to their plates which was not the point of the guideline.

America is a capitalist economy and “nutritionism is good for the food business (pg 40)” but Michael Pollan, in his book In the Defense of Food, asks it is good for the American people? The average American finds themselves relying on science, journalism and the government to decide what to eat. “Nutritionism favors even more novel kinds of high processed food (which are by far the most profitable kind to make), it actually enlists the medical establishment and the government in the promotion of those products. (pg 52)” Of course, nutritionism has it’s root in a scientific approach to food but journalism, the government, and the food industry has just as much responsibility for the way American’s view food.

Since the industrialization of food in America there has been numerous health guidelines and products that the government has endorsed but then a few years will go by and the scientific evidence will show that those guidelines or products are actually harmful. This is a cycle we have seen repeated over and over. So these questions must be asked, how can we change the way the government deals with food policy? Why is the government not changing policies when they know some food policies are mistakes or have potential to be mistakes and are not fully tested?

1 thought on “The Government’s Hand in the Food Industry”