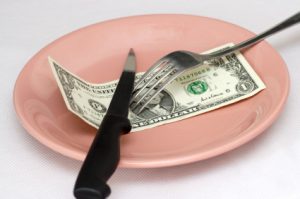 Michael Pollan’s In Defense of Food is no doubt an interesting read that pulls back the curtain on the modern world’s obsession with nutritionism.  He illuminates where the food industry has seemingly herded the masses into a rabbit hole of misinformation and reductionist thinking.  Pollan presents a solid argument into seeing food as a holistic, synergistic process that ties to our quality of health.

As a person who is fairly selective about what I consume, I invest time, effort and dollars into my diet.  However…I can afford to.  While Pollan makes a very convincing argument that we should all shop the perimeter of the market, he misses the very big point of the privilege it takes to do so.  In working with nonprofits that use charity to feed those under-serviced, one experiences the vast divide of those that have and have not.  Those that have the time, resources and funds to be able to prepare and eat the “perimeter” are vastly segregated from those whose primary concern is staying alive.  What I think deserves more of the spotlight is why is it cheaper to buy a processed frozen meal than a fresher alternative?  Why is there so little education around the synergistic effect of whole foods and plants in a balanced diet?  How is it the norm that healthful eating should cost so much and be so much more difficult to achieve?

Food insecurity is an aptly named phenomenon.  As a society in which we should care more about the sum of its parts, we should look more to the why of a culture’s food habits as opposed to “who.”  The shame should be shifted to the industry that dictates what is cost effective for a family as opposed to what a family should be forced to prioritize.  As our pocketbooks command so much power in our culture, those that have the heft should speak, and spend, for those that cannot.

2 thoughts on “To whom do we shift the blame?”