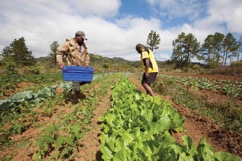 Small farming communities in developing nations struggle to survive in a global system built around cheap food. Farmers are competing against large “corporate” farms who have the ability to spend more, can sell production at a lower cost, and have access to technological resources. Systems, such as the government, influence the production, marketing, and success of small farms. For instance, small farms must meet the USDA processing, production, and packaging regulations which can end up costing these small farms more money in order to export their yield into the U.S. (Carolan, 2013, p.17). This governmental system also communicates the market “needs” for non-traditional production of food, such as fruit, which isn’t necessarily the circumstance (Carolan, 2013, p.17).  Rather than using “market signals” to help small farmers understand the desired export(s) it instead communicates an inaccurate need. This can result in financial struggle which has the potential to put small farms out of business. Small farms are also put in direct competition with larger farm “corporations” who have the funds to produce a larger quantity of food, pay for labor, and export to the developing world.

1 thought on “The Struggle for Small Farms”