The Real Cost of Cheap Food has got me thinking about the hidden costs of “cheap food.” What may seem cheap in terms of the grocery bill total is truly quite the opposite. Thinking about this issue in terms of systems theory brings a sense of organization to such complex ideas. On a local scale, “cheap food” effects the healthcare system, the pharmaceutical industry, the supplement industry, local farms and farmers, the environment. Cheap foods reach goes as far as developing nations, and I don’t quite mean this in a positive way.

Carolan’s book mentions a quote by Pollan which indicates just how expensive “cheap food” is. He sates, “Fifty years ago, Americans spent over 17% of their income on food… 5% of the national income was spent on healthcare. Today, those numbers are just the reverse. The average US citizen spends less than 10% of their income on food, while the cost of healthcare now tops 16% of national income.” I am almost certain that if the government put some of that 16% into subsidizing whole, nutritionally dense, real foods, or supporting farmers so they wouldn’t be forced to grow only corn and soy to survive,  it would not need to use 16% of its national income on healthcare. This 16% is significant because it comes from our tax dollars, our tax dollars which are similarly going to support those corn and soy subsidies. This is just one of the examples of the cost, there have been many more mentioned in Carolan’s book, and in the readings and videos of the past few week and the weeks to come. 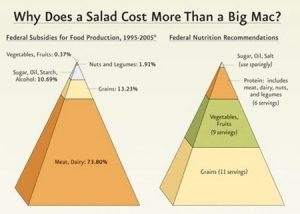 As we are realizing the far-flung consequences of our food system, what are we to do? As Maniates mentions, “recycling” can only have so much of an effect, but recycling is advertised rather than reusing. Living systems are circular systems and I think this should be our ultimate aim in the food system. The Earth is our greatest example of a circular system and as scientist study the systems within Earth, I wonder if it would be possible to use the feedback loops of Earth as a model for possible feedback loops in our food system. One example, living in Europe that I see is the reuse of glass bottles for drinks. At first, I was shocked to see that my glass at the restaurant look scuffed up, but then I realized this is because the glass is reused. The restaurants collect these bottles, they get sent back to the companies, sanitized, refilled and recapped. This is just one way a feedback loop has been reintroduced into the system, what are some other possibilities?