The 21st century has and will continue to challenge human civilization with increasingly unprecedented threats of a wide variety. Threats that come from increased probability of great power conflict and the destabilizing potential of AI are among these, however, the most prescient long-term danger to societies across the globe comes from the vulnerability of food and water systems. The latter issue might topically appear mild compared to the former two but upon closer examination one can see the hidden consequences of systems failure in this regard, especially when coupled with the threat posed by climate change. The Great Acceleration, a phenomenon which denotes the massive acceleration in technological growth mankind has experienced since the 1950s, has facilitated increasing degrees of societal interconnectedness not previously seen in human history. In other words, cultural and economic systems from all over the world have became increasingly interdependent on one another. This ensures that a crisis, whether facilitated by man or nature, will have a reverberating effect far outside its geographic location.

When coupled with climate change, this is concerning as an increase in severe weather events combined with long-term shifts in temperature will have a substantial disruptive effect on agricultural systems across the world. The failure of the global community to effectively combat this challenge can already be seen in the outcomes of the Arab Spring, including the rise of ISIS. Such is the case, as the primary catalyst of these popular uprisings was plummeting crop yields and therefore rising food prices. Finding efficient ways to employ new technologies and reduce carbon emissions in order to strengthen food systems is paramount, if Earth is to ensure its food and water systems are able to effectively serve as a bulwark against the aforementioned kinds of social upheaval. 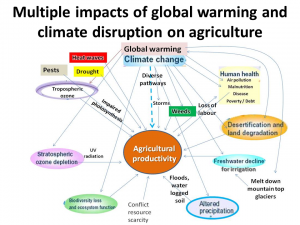 4 thoughts on “Blog Post 2: Food Security in the Age of Acceleration”