The world’s food system is intricately connected through a myriad of national and international organizations and policies. Ironically, at the same time that millions of people are dying from a lack of access to food, the Western diet of an overconsumption and processed foods is increasing mortality through diseases such as obesity, diabetes, heart disease, and cancer. Food and trade policy have paradoxically succeeded in providing more food while simultaneously producing a less healthy world. 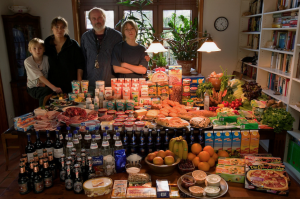 International policy is visible on the tables of these families. While Germany and other developed nations benefit greatly from cheap food imports, the 1994 Agreement on Agriculture (AoA) that emerged from earlier GATT negotiations, “resulted in an uneven set of rules which disadvantaged small-scale farmers in developing countries while maintaining rich world subsidies”. (Jennifer Clap p. 62-3) In Mexico, the uneven advantage continues through the creation of the North American Free Trade Agreement (NAFTA). NAFTA transformed the local landscape prompting huge losses in Mexican agriculture, as small farmers could not compete with US subsidized commercial farms and had to shutdown. (Free Trade vs. Fair Trade) The Casales family has suffered as a direct result of NAFTA; first by the loss of Marco Antonio’s brewery job and then further by the loss of their small shop.

Comparing food policy through the tables of these two families emphasizes the inequality and environmental impact of globalization and neoliberal policy. The way forward is clear, although not easy. Policy must focus on the interests of the majority vs. the interest of the rich and powerful. The global food system is inextricably linked to social, political, and economic factors and will not be resolved until policy is prioritized to serve the world’s poorest countries and people.