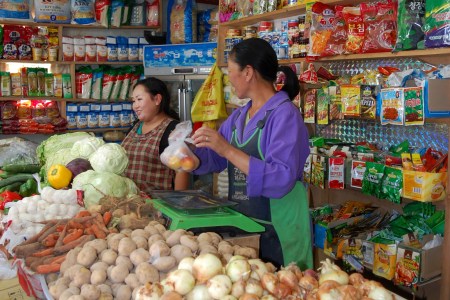 Photo by the author

Compare the diets of the LeMoines of France and the Batsuuris of Mongolia, as Menzel and D’Aluisio have in Hungry Planet (2005), and the impact of climate, culture, and industrialization becomes clear: The LeMoines’ larder is full of packaged, ready-to eat fare while the Batsuuris’ table still recalls the traditional diet of nomadic herders.

Mongolia’s harsh winters and short, inhospitable growing seasons have naturally resulted in a meat- and dairy-centered diet, and a culture in which vegetables are enjoyed but scarce. This in turn has driven the economy (and vice versa): A comparative advantage in herding has led to grazing on eighty percent of Mongolia’s land. While growing livestock numbers contribute to desertification, vegetables are imported from China, where climate, government support, and production scale drive down costs. Mongolians can buy imported potatoes for half the price of locally grown.

France in contrast, with its temperate climate and modern infrastructure, can grow and transport more of its own food. And with per capita GDP six times Mongolia’s (when Hungry Planet was published), the French can also import more food—allowing the LeMoines’ tropical fruit and fresh fish along with ‘convenience’ foods such as ready-made salads, bottled beverages, and McDonald’s.

But while the diets of the LeMoines and the Batsuuris may look radically different, soon they may become surprisingly similar. The Batsuuris are part of a great shift, as Mongolia modernizes its economy and families abandon the countryside in search of work in the city. Menzel and D’Aluisio note there were no McDonald’s restaurants in Mongolia at the time of publication, but as of 2016 both KFC and Burger King operate in Ulanbaatar. Before long, the Batsuuris, like the LeMoines, may be ‘savoring the memories’ of their traditional diets, while slipping into fast food joints for quick meals on the run.