I chose the United States and the People’s Republic of China as my nations to compare and contrast. Political and economic factors play a significant role in explaining the differences between Menzel’s pictures regarding American food systems and Chinese food systems. This point is made evident primarily through the picture taken in Weitaiwu Village, in which a group of people in a rural setting are transporting what appears to be largely agricultural foodstuffs for personal use via bicycle. As the food does not appear to possess the vast plethora of commercial markings found in all the pictures of American food, it is safe to say that Weitaiwu does not necessarily have a strong logistical connection to China’s national food systems. Such is the case for largely political reasons. Despite its power being founded on the support of rural peasants, China’s ruling Communist Party has a long history of favoring urban investment over rural development. 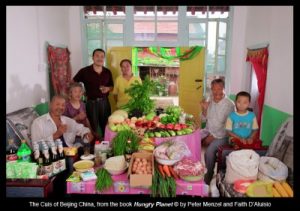 Menzel’s photos of American food systems paint a picture of a more evenly distributed political and economic philosophy. While the pictures were taken in widely varying geographic locations (California, Texas, North Carolina), the essential quality of the foodstuffs appeared largely comparable to one another despite somewhat varying household budgets. This implies that America’s food system has strong logistical interconnection as well as limited market segmentation. 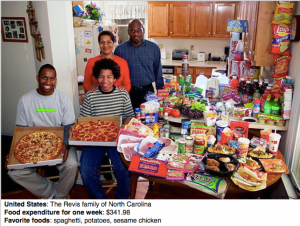 The key international institution that affects global food systems to the greatest degree is the World Trade Organization and the ‘Agreement on Agriculture’ created under its auspices in 1994. The AoA played a significant role in creating the differences between the pictures of American and Chinese food systems largely because of the asymmetric manner in which it has framed the legality of large-scale agricultural subsidy programs for products sold in the global marketplace.