The Ayme family of Tingo, Ecuador and the Melanson family of Iqualit, Canada appear to be polar opposites. The Aymes spend $3.50 per person per week for their food, while the Melansons spend $69 – a staggering 1,970% increase in cost. The Aymes are subsistence farmers and eat produce and grain nearly exclusively, while the Melansons consume far more meat, dairy, sugar and processed foods – hallmarks of the Western Diet. The Ayme family is nearly twice the size of the Melansons, a reflection of their respective countries’ progression through the demographic transition. Disparities are further showcased in their housing, clothing, and methods of cooking, food storage and transportation. 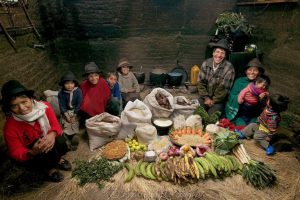 Canada and Ecuador share colonial pasts, but their modern histories diverge. Violent land disputes and a seven-year military junta marked Ecuador’s independence. Canada grew and industrialized under the protection of Great Britain, gradually gaining autonomy and affluence. Ecuador’s export economy is based on petroleum and agricultural products, yielding a mid-range GDP but requiring intense natural resource use. Canada’s per capita GDP is on par with the US’s, and that wealth means power in world trade negotiations. Ecuador and other nations forced to liberalize trade under SAPs in the 1980’s have a weaker position in WTO negotiations, while wealthy countries like Canada continue to maintain a higher degree of protectionism. 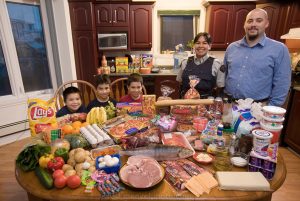 Forces across different scales and times shape what these two families eat, including local culture, ecology, colonial histories, and years of complex international trade relations. Despite their stark lifestyle differences, their remote environments limit access to certain types of food, whether due to cost or distribution. Both diets show deeply rooted cultural and ecological traditions holding sway in hyper-regional protein choices like guinea pig and polar bear. And, while the disparity in their affluence is striking, both families wore beaming smiles when photographed by Peter Menzel for this series.