In the US family I see an overwhelming amount of processed foods—frozen pizzas, corndogs and quick fix meals like bagels or eggs. In most developed countries, processed food is overwhelmingly present when compared with whole foods and raw cooking materials. This family definitely takes advantage of the “cheap foods” present in grocery stores, probably not considering many of the implications mentioned in Carolan’s book (Ch. 2). Fresh fruits and vegetables make up about 10% of the total food for the Caven family of California, opposite of the family in Guatemala, for whom processed food makes up about 10% of their weekly diet. 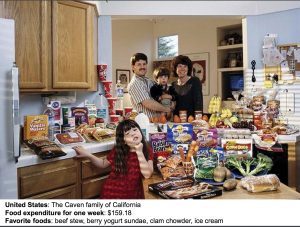 Based on our knowledge of trade liberalization in developing countries, there is a pretty significant chance that the grains on the table from the Guatemalan family come from a developed country at subsidized rates (Clapp, 63). It may be that more of the food is imported as well, but from the photo, it isn’t obvious. This image may give us a glimpse into the state of the economy. If grains are coming in at subsidized rates, how are local famers doing? 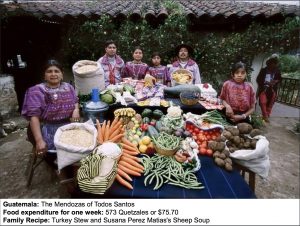 Culturally, the family from Guatemala is following their traditional diet. Things like potatoes and tomatoes are almost certainly local crops, and I can guess that most of the other produce comes from local farms as well. The American family, in one sense, is eating the “traditional” diet as well, a standard American diet. Over time, this land, a melting pot of cultures, eating practices and more melded together with the fast-paced life, to produce: Pizza Hut and Taco Time. The food practices of various cultural groups (which have kept people well-nourished and disease-free for the most part) have been left behind with the moving tides of modernization, bringing with it the unfortunate western diseases.