For my essay, I compared the food consumption and spending of the Revis family in North Carolina, and the Aboubakar family living in a refugee camp in Chad. The Revis family’s average spending was $317.25, and was made up of a large amount of processed or instant foods, take out, and foods that are full of preservatives and sugars, which are generally cheaper than healthy or fresh foods. The Aboubakar family only spent  $1.23 on their food for the week, which was made up of grains, rice, and a handful of vegetables, which is most likely sourced locally. 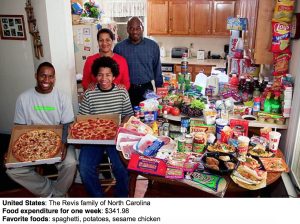 The most notable difference I saw was the availability and access that each family had to food and resources. The Revis family, as those living in the United States are accustomed to, had quick and easy access in obtaining all their food from stores or restaurants. Most people living in the United States has the luxury of being able to access cheap foods at any time. Globalization has made it so food is sourced in mass quantities at very low cost. However, while this benefits the giant consumers of the globe, such as the U.S, it negatively impacts people living rural, developing regions. Purchasing goods at such low costs from farmers in these regions keeps them in a state of poverty, and they also stay low on resources since all of their agriculture gets sent out as exports, for which they aren’t paid enough to lift their economy.

While we have the luxury of “access” and availability in the United States, this is not the case for other parts of the world such as the family in Chad. This family resides in Breidjing Camp, a refugee camp that is intended to provide relief to people fleeing from the violence and civil unrest that plagues Sudan. The hostile state of Sudan restricts the access the people there have to food and resources. Those who are able to take refuge in these camps rely on the food that international organizations are able to provide to them, or the availability of the food in the region, which, if it is a nation like Chad that is also still a developing nation with a weak economy, is not necessarily plentiful. 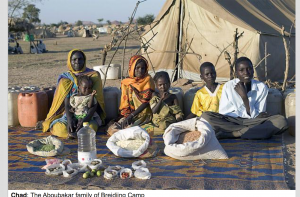