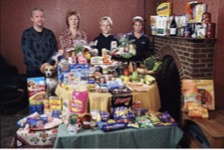 The access to food greatly differs between families in Great Britain and Guatemala. Affluent countries like Great Britain have access to a variety of food that is not native to the area. For instance, in the photo of the Bainton family, there was processed food, chocolate, avocado, and bananas. Since these foods aren’t produced in Great Britain, I was informed of the international trade that exists between Great Britain and developing countries. I argued that citizens from affluent countries experienced ecological blindness because of the access to exotic foods. The ecological blindness exists because of the easy access to commodities like chocolate. Rather than thinking about, where did the chocolate come from? How was it made? Were the cacao beans obtained in a fair manner? The Bainton family is able to consume their chocolate without entertaining a second thought. 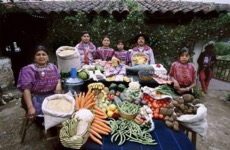 On the other hand, I noticed the Mendoza had a more balanced diet consisting of fresh vegetables, fruits, some meat, and grains. I noticed a lack of obvious imported goods, such as, tea or corn. I also noticed a lack of exotic foods, such as coffee, avocados and chocolate (cacao beans) that might be local to the region. This caused me to question if locals had access to exotic agricultural commodities. In order to grow the economic status of the country, the Guatemalan government, might feel compelled to preserve these type of commodities for exporting. If this were true, it might result in costly prices for locals to purchase these items. I theorized that this could be due to the country’s reliance upon exotic exports to large corporations, such as chocolate companies like Cadbury, to help provide economic sustainability for the country.