Peter Menzel’s photographic essay, Hungry Planet, compares what the typical family eats in different countries around the world. The photos and captions shown allow the reader to see what is in their diet, how much it costs per week, and other hints about lifestyle in that country. I chose to compare Japan, a developed country, with China, a developing country.

The picture I chose for Japan was “Japan: The Ukita family of Kodaira City.” Kodaira City an urban city close to Tokyo. Food expenditure for one week is given as $317.25 U.S. dollars. There are four members of the family, a man, a woman, and two young women. The family appears to live modestly in a small home. Based on the food they have displayed, it appears most of what they consume comes in packages and bottles. There are a few fresh vegetables and fresh fruit items but it seems to make up a small portion of their diet. The meat they consume is also packaged. 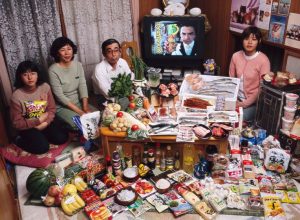 Living in an urban environment the Ukita family is dependent upon packaged food as part of their diet. There are very few alternatives to packaged food that are as time and cost efficient, two very important priorities for urban families. Japan’s foreign trade policies allow its people to import food, which means domestic producers must compete with foreign companies. This is an uneven economic playing field if the goods being produced in one place are less expensive to produce than the other. Agricultural communities that produce food are especially vulnerable to this type of imbalance. Governments can subsidize the goods for various reasons, creating artificially low prices to hurt competition. Jennifer Clapp’s “Agricultural Trade Liberation” lecture on the WTO, and the other videos that week addressed the impact that this type of trade imbalance has on developing countries like Haiti and Kenya, while also highlighting the important theme that free trade is not fair trade. Developed countries which use modern agriculture techniques can produce significantly more food in less space than countries which do not have modern agriculture. Depending on what Japan’s foreign trade policies are, they could be causing harm to communities all around the world.

The picture I chose for China was “China: The Dong family of Beijing.” Food expenditure is given as $155.06 U.S. dollars for one week. There are four members of the family, a man, a woman, and a young man and a young woman. The family appears to live modestly in a small home. Based on the food they have on display, it appears their diet is a mix of fresh ingredients and packaged food products. Notable are a number of fast food containers and a large machine that dispenses clean water. 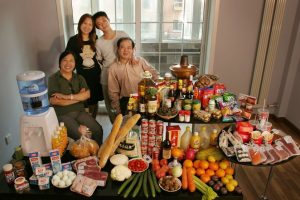 The Dong family lives a very similar life to the Ukita family in Japan, but the cost of food per week is $162.19 U.S. dollars less. Both families are located in major cities and appear to live in similar size homes and have similar lifestyles. The Dong family consumes fewer packaged food items but they have fast food items that the Ukita family does not. It is unlikely that the Dong family does not have access to packaged food, nor is it likely that the Ukita family does not have access to fast food, so at least part of the difference between the two families’ food expense is a matter preference. What is more likely to be the biggest factor is the cost of living in each country. China’s food system is fairly well developed. People in both rural and urban areas generally have enough food to eat. It’s large population and low percentage of arable land are precarious, but China has been increasingly importing its food. Notably last year, there was news that China was finally allowing the import of American rice. The Dong family consumes beef, more so than the Ukita family at least. In our assigned reading, Richard Robbin’s essay on beef show how the American beef industry has the world hooked on its’ product. Like rice, American beef imports were allowed for the first time in many years. Robbins pointed out that beef consumption was tied to increasing incomes, and that certainly is the case with China’s current economy. More families are able to afford what was once priced beyond their reach.