What do people eat around the world and how much do they spend on their diet and how do they transport and prepare the food? are some of the questions that Peter Menzel, a photojournalist, set out to answer. In his photo-essay he captures the habits of families in different countries, cultures, and traditions by showing their family set-up, their food choices, and the amount that they spend per week on their food.
His photo-essay is very informative and provides as much detail about the twenty-nine families that he photographs. It is also apparent that he selected a cross section of the world which reflects the inequalities of the food system, the global system, the political and cultural systems.
By comparing a European country, France, with an African nation, Mali, there is a huge contrast between these two countries and it is surprising to learn what a family gets to eat in each country. The Le Moines family from France are a nuclear family. They consist of the parents and two teenage daughters, plus a cat. The amount that they spend on their weekly food bill is $419.95. This amount allows them to purchase food items such as bread, pasta, pastry tarts, wine, juice, fruit and vegetables, meat, cheese, eggs, nuts, packaged microwave meals, frozen food, cereal, and yogurt. They also like Thai food which they like to order as a take-away. They consume a modern diet which contains convenience and take-out foods. Not any of this food is grown or produced at home because living in a developed country gives them the benefit that they do not have to do this for themselves. Instead, this function is a process set in place where agriculture has been systematically managed and controlled by governments to create a supply chain so that food is manufactured for people, rather than individually having to produce their own. As part of the system of food consumption, the French family shopped for the food in a supermarket and they will prepare the food in their home kitchen.
In comparison, the Natomos family of Mali are an extended family. Their members consist of eight adults and seven children. They appear to be siblings, parents and grand-children living together as a multi- generational family. Altogether, they spend $26.39 per week. They have a traditional diet which consists of rice, grains, milk, cheese, and dried fruit. If they are fortunate to eat meat, it will be slaughtered and consumed on that day because they do not have refrigeration options. The food has been grown and produced by themselves or community members who sell and trade at the market. They cook in the outdoor open fire to prepare their meals and will eat together as one family unit. It is a cultural system to share dinner together. Already, we can see that feeding a family of fifteen people on a small amount of money is a challenge. In analyzing the cost per person, the French family spend $104.98 whereas the Mali family can only spare $1.75 per person. Why is there so much disparity between the countries?
The inequalities between the developing countries and the western nations reflects the political influences of power. International institutions are relevant in explaining the differences in the food systems disparity because they manage how they will trade and negotiate the food they are marketing. According to the US Aid website on Mali,
“… over 29 percent of the population is malnourished. Low productivity, post-harvest crop losses, under-developed markets, and vulnerability to climate change are some of the major challenges which need to be addressed for Mali to become food secure and benefit from more broad-based economic growth.” 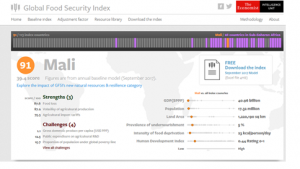 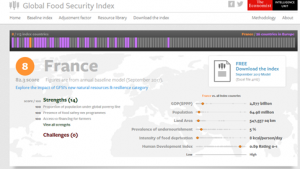 A comparison of the data from the food security index shows that France has no challenges and Mali has 4 challenges to overcome.