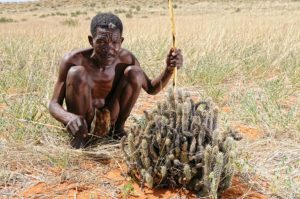 A male member of the San community crouches behind a Hoodia plant shrub. Photo: Sun Safaris

Our world food system is broken. The evidence of this is most apparent in the ironic stories of food culture on our divided planet. Developed countries produce many times more food than needed to feed their populations, the US produces 4 times its needed calories (Stuart, TED), while developing nations struggle to produce enough to feed their hungry populations. Indigenous people of the San tribe in South Africa chew the flesh of the succulent plant Hoodia in order to relieve hunger pains when they have no food, while people in developed nations take Hoodia as a weight loss pill to try to avoid eating too much of the overabundant food surrounding them. (Jindrova, Silent Killer) Hunger is the single largest cause of health problems in the world with 6 million children dying each year from a lack of sufficient food (Jindrova, Silent Killer), while at the same time the long-term health effects brought about by the overconsumption of food is the leading cause of death in the US. (Health, United States, 2016. Table 19 p.128)

If it is true, as Richard Robbins argues, that “the most difficult (factor) to ‘fix’ is our consumption behavior, since it serves as the foundation of our culture” (p.237) instead of trying to work against that “foundation” we should instead look for ways to capitalize on it in the fight against hunger. How can the public and private sectors use consumption to the benefit of the hungry? The ‘Fome Zero’ program in Brazil removes the market forces that hinder access to food through subsidizing farmer’s markets, restaurants, and food delivery to poor neighbourhoods; allowing more consumption of fresh local foods by hungry people (Jindrova, Silent Killer). Around the world there are food rescue apps, which aim to connect supermarkets, restaurants, or farmers who have food that they wish to sell cheaply or give away rather than throw out; thus connecting individuals who want to consume the products to those who need to disperse them. In the US, the University of California has been working toward reducing waste in their dining halls by renting reusable containers to students to take food and have also produced a great series of videos with Vox and Dr. M Sanjayan, global conservation scientist, to educate the public about food waste and climate change solutions. By educating consumers about more ecologically friendly ways to engage in consumerism, our culture can break free from the irony, reduce waste, and redistribute food to those who are hungry while at the same time, work toward reducing our impact on the earth.

2 thoughts on “The Irony of Hunger”