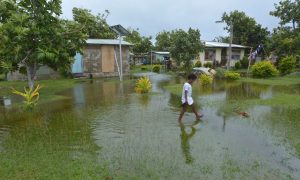 Fiji is already seeing affects of climate change, one of the major problems being worsening storms. It is said that the island will need to spend over $4 billion to strength it’s road systems and to protect it’s water supplies, healthcare, and education resources. Fiji is also expecting to have a significant sea level rise, as much as one meter by the end of the century. The physical effects that the people of Fiji will see are startling but there will also be massive economic affects to the country because of climate change. It is estimated that by 2050 the countries GDP will be down by 50%.

This means that for the people of Fiji there will be less money to spend on essentials like food and water. Will the country have enough money and resources to import more food if their agriculture sector reduces significantly? Countries like Fiji will see and feel the enormous impact that climate change will have. They will suffer greatly if they can’t strengthen their resources now. However, Fiji has added little to the problem of climate change.