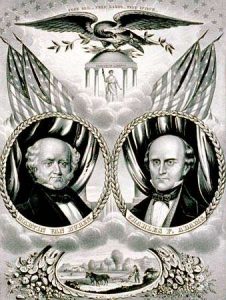 Campaign banner for the Free-Soil Party, 1848. Library of Congress

Politics and land are an inseparable combination. Humans, from the dawn of agriculture to modern day, have viewed land as property to be acquired and controlled. In the pre-Civil War US, a political party called the Free-Soil Party (1848-54) ran on a platform opposing expansion of slavery and also called for free land to be given to those who would settle newly acquired territories after the Mexican-American War. Today, the Farm Bill largely controls which crops are grown on land in the US. This in turn determines which crops are available to export on the world market and which are going to be given as food aid. Conservation of land has also been established and taken away through policy.

Viewing land through the lens of political ecology allows us to see how these policies shape the land and its relation to power. We see a world that has very uneven access to resources. A world in which countries with financial power are acquiring land resources of poorer countries in massive “land grabs,” thus ensuring food security for their population, while simultaneously removing that very same security from the more vulnerable developing populations. In Ethiopia, these leases of land to foreign investors have been associated with, “human rights violations and the forced relocation of over a million Ethiopians” (Brown p.107). Developing countries desperate for revenue are selling the well-being of their population and future for short-term gain and are re-shaping their land.