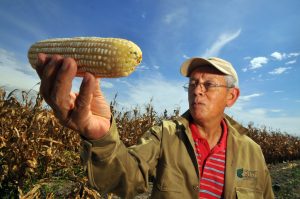 Much of the conversation over GMOs within the US natural food industry has focused on issues of labeling and the dangers that multinational corporations like Monsanto pose to organic farmers. For many, the 2008 documentary Food Inc. was their first exposure to the dark side of these high-tech advances, detailing how intellectual property lawsuits from agrochemical firms have put some farmers out of business. Locally, in 2013 Washington State voters narrowly struck down Initiative 522 on GE labeling.

The debate over GE food becomes increasingly complex in a global context. GMOs may have a major role to play in the future of our planet’s food supply. As the human and animal population of the world grows, we have more mouths to feed with diminishing fresh water and arable land. Our best option to feed the planet may be genetically engineered seeds that produce increased yields and can withstand specific environmental conditions. It is difficult to ignore the possible utility of GE seeds when faced with the possibility of a global food crisis.

While Vandana Shiva asserts, “organic farming can feed the world,” some organic farming practices can be just as environmentally degrading as conventional farming. However, some organically minded solutions like push-pull farming and other biological pest controls that work with the environment are less damaging than GE pest-resistant plant strains, since they preserve genetic diversity.

A major concern is that so much of the power in biotechnical engineering lies with multinational corporations pursuing with profit above all, not the wellbeing of vulnerable people and ecosystems. The “precautionary principle” applied by the European Union regarding GMOs could be further applied to the environment in pursuit of sustainability. Beyond potential long-term effects on humans, our delicate living ecosystems may be disturbed in unpredictable ways on unknown scales by GE agriculture.