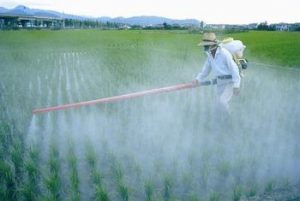 Fertilizer is a major component of fossil fuels—one that has completely transformed the number of crops produced, and in turn has transformed our way of life. Chemical fertilizers are responsible for spiking the production and growth of crops, which has increased the food supply worldwide, allowing for an increase in population. This change in agriculture began with the Green Revolution, as scientists discovered a way of using technology to increase crop production. The irony in the Green Revolution is that the farming practices are quite damaging to the environment, and not very green at all. The amount of fossil fuels it takes to make this revolution successful are alarming; the chemical fertilizers are harmful, the topsoil is eroded, there is a lack a variety in the crops—which is making people sick, and the amount of land that is used to grow the crops for human as well as livestock consumption. In 2008 there was an increase in petroleum, leading to an increase in food prices. The increase to the cost of food ultimately resulted in many lives lost in developed countries, as they couldn’t afford to eat.

Many wonder if reverting to a society that isn’t reliant on so many fossil fuels to produce crops is possible in the U.S. We witnessed Cuba experience something like this ideology when Cuba lost their entire energy supply when the Soviet Bloc collapsed in 1989; this was called ‘The Special Period’. Out of disparity, Cubans learned that they were capable of prospering without fossil fuels. They utilized the advice of their elders and became very successful at urban farming. Without the chemicals, the entire process is organic and without corporate involvement, the urban farms are very profitable for farmers. Cuba’s dependency in energy and industrialization, and a resurgence in organic farming are valuable lessons in that the U.S. can learn from.

1 thought on “The Irony of the Green Revolution”