The contemplative practice from lesson seven really stuck with me because it helped me overcome my decidedly negative preconceptions about the role international law plays in combatting climate change. As previously I had concluded that although it was capable of facilitating minor progress in this regard, international law was largely incapable of creating significant positive impacts. My primary evidence for… Read more »

My biggest conclusions from the course this quarter primarily concern the nature of the systemic importance that food and water systems possess for human societies and how this will be impacted by climate change. Such is the case as data regarding these aforementioned impacts is far more severe than previously imagined. However, simple recognition of the multitude of ways climate… Read more »

Land and water are not merely biophysical phenomena but valuable commodities for global financial markets that play a large role effecting the dynamics of political power. Traditionally, whenever I gave this phenomenon thought it always seemed that state actors were the ones with the most to gain politically through policy shifts in regards to land and water usage. However, the… Read more »

My primary takeaway from these lessons has been the massive role that political power plays in how food and water systems are managed throughout the globe. The way these systems are managed often correlates to the distribution of political power, especially so in developing nations. Throughout history, it is clear that hunger has been consistently used as a weapon by… Read more »

This contemplative practice regarding living systems has made me do a great deal of thinking about the living systems which are most vulnerable due to the climate and geopolitical trends of the 21st century. Climate change in this century will have horrendous consequences for food and water systems throughout Africa, which provides the most shocking example of its potential effects… Read more » 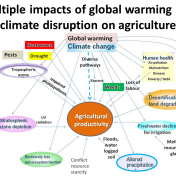 The 21st century has and will continue to challenge human civilization with increasingly unprecedented threats of a wide variety. Threats that come from increased probability of great power conflict and the destabilizing potential of AI are among these, however, the most prescient long-term danger to societies across the globe comes from the vulnerability of food and water systems. The latter… Read more »

My primary takeaway from the course material this week was a greater understanding of the special interests and their interrelationships which have profoundly affected the American diet. The term “revolving door” comes to mind, interestingly so, as this term generally evokes images of the way industries such as finance and energy profoundly influence policymaking. In this case, however, the part… Read more »