Food ecology of the world was a very thought provoking subject that I did not know anything about. Prior to the class, I thought that it would only be about the countries in the third world and how people suffer from hunger and poverty. I had no idea that there are many factors that come into consideration when examining the… Read more »

The two most vital resources that humans need for survival are water and land. Both resources are environmentally, politically, and ecologically significant as they support the food production system for human survival and sustainability. As the world population grows larger, there is a growing concern for providing food, for generating food into biofuels, and people wanting to move up the… Read more » 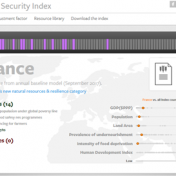 Human behavior towards the environment has allowed masses of natural habitats to change towards human needs. This current state of affairs is referred to as the Anthropocene epoch which scientists, geologists, sociologists, anthropologists and environmentalists all acknowledge that this is a stage which we have entered gradually, and which has a huge impact on our lives. The Anthropocene is a… Read more »

Diabetes type 2 is on the increase. This disease has been identified as a new phenomenon which is linked to diet and exercise. Exactly, what is type 2 diabetes? It occurs in people whose bodies no longer use insulin. The insulin hormone helps the body regulate blood sugar. When the blood sugar is too high, the disease causes blood sugar… Read more »