Sea Level, Climate Change, and You!

There are a variety of global climate models available. We will be using the latest model runs intended for the next IPCC assessment report (due September, 2013). In this project we have chosen 18 models which have runs using historical data (up to 2000) and projections of the future (2000 through 2100) for each of the four representative concentration paths (scenarios about what the world may look like in terms of greenhouse gas and other emissions, land use, etc.). The models have all been standardized by subtracting their average temperatures from 1970-1999. Still, they yield different answers as to what the temperature anomaly (change from the period 1970-1999) will be for a given year under a given scenario. In the four figures below we show average global annual temperature for each of the four scenarios. Each of the 18 models have the same separate color.

Climate models are well tuned to produce good projections of mean global temperature, but have not been as successful in reproducing sea levels. This is partly due to difficulties in modeling glaciers and arctic/antarctic land ice. Instead of using model output, empirical (i.e., data-based) models have been developed. We use a model due to Ramsdorf (2007), with a couple of technical modifications, updated with the latest data available in May of 2013. This approach relates smoothed (over time) sea level (a) and smoothed temperature (b)
.

The actual sea level is not the same as the global sea level, due to land rise, tectonic plate activity, ocean streams, local atmospheric pressure etc. We need to fit the sea level at Seattle (the site closest to Olympia having a long series of careful measurements available) as a function of global sea level.

The tidal activity at Olympia is not identical to that at Seattle. Tides at Olympia tend to be higher. Comparing data from the two sites (we have less than a year's worth of data from Olympia) leads us to add a constant to the Seattle values to get Olympia values.


5. The issue of variability

We could just estimate sea level rise at Olympia by averaging all the climate models and applying the models in 2.-4. to the average temperature projection. This would give us a single number for each year and scenario.

But there is variability among the climate models. As a lower bound on that, we can use each climate model projection to calculate an estimated sea level using the models 2-4. It is only a lower bound, because there may well be other climate models that give different results, but they are not part of our data set.

The estimated coefficients in the model in 2. are not precise. But we can estimate the variability of these coefficients, and apply that variability to the paths we just computed from all the climate model projections. The picture shows the range of where we are 90% confident that sea level rise will lay, using the 19 paths and the variability in the relationship in 2.

The estimated coefficients in the model in 3. are not precise either. Again, we estimate the variability and carry it through the previous estimates.

Finally, the estimate taking Seattle sea level to Olympia sea level is of course not precise either. We carry its variability through as well.

These figures are our best 90% confidence intervals of the mean sea level in Olympia for each year and scenario. What this means is that we are 90% confident that the regions in the final four figures will cover the actual sea level rise at a given year for a given scenario. We do of course not know which scenario (if any) will take place. That is why predicting the future is so difficult...


6. Slicing this way and that

In order to get a feel for what the figures in section 5 really mean, we can cut across a year and look at the entire distribution (not just the middle 90% of the distribution) of mean sea level height in Olympia for that year. The figure shows where the different sources of variability come from for projected sea level rise in 2050, depicted as a probability density function. The colors correspond to the figures in the previous sections, so the black vertical line corresponds to the median model; the grey histogram to the various climate models; the red curve to the relation between global temperature and global sea level; the blue curve adds the variability due to the relation between global sea level and Seattle sea level; while finally the green curve depicts the full variability, also including the relation between Seattle and Olympia sea levels.

In 2050 all scenarios give very similar results. We next look at 2075, where the scenarios are starting to look more different. 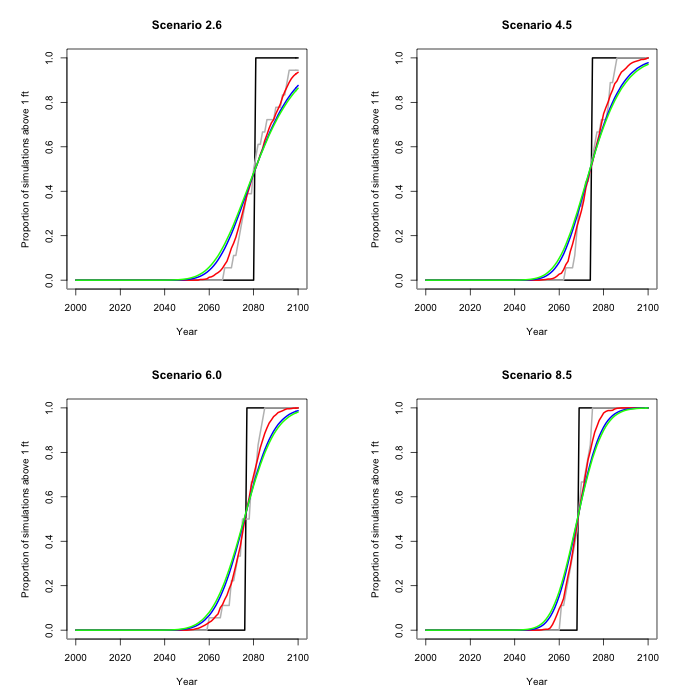 7. Code and data used for these calculations

All the calculations have been done in the free statistical software R. The code and the data are freely available to anyone interested in running the analyses.