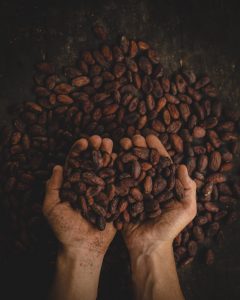 In The Real Cost of Cheap Food, Michael Carolan argues that “free trade is rarely fair” for smallholder farmers competing in the globalized food marketplace. The Fair Trade movement has risen in the last decade as a means of leveling the playing field for the developing world in trade relations. Seattle’s Theo Chocolate is a Fair Trade, bean-to-bar chocolate maker that partners with cacao farming cooperatives in the Democratic Republic of Congo – an ecologically fertile country ravaged by conflict despite democratic elections. Theo pays incremental premiums far over market price for organically grown beans based on predetermined measures of quality. Farmers can reinvest the profits within their families and communities. Theo supports long-term initiatives for education and maternal health in particular. Those factors, as described by Lester Brown in Full Planet, Empty Plates, may help Congolese families control births and demographically transition to population stability.

Theo has invested in the development of DRC’s smallholder cacao farms to feed its supply chain for production in Seattle. The resulting chocolate is distributed throughout the US and Canada – but not back to the DRC. Very few cacao producing countries also have chocolate producers; cacao thrives in equatorial nations that tend to be less affluent and unable to afford the equipment for chocolate production. That many cacao farmers have never tasted chocolate is a stark example of the inequities that the globalized food system creates. Further, Theo’s business is just a drop in the bucket of the global cacao market, which is dominated by slave and child labor operations in West Africa. Fair Trade may be a step in the right direction, but to improve outcomes on a larger scale it needs to be the standard, not the exception.

2 thoughts on “Fair Trade Cacao, from the Congo to Seattle”