My takeaway from this week’s material is that our planet is in a constant tug of varying systems. Large, complex systems that often seem random and complex viewed from afar, but manage to sustain themselves in relative harmony. For example the industrialized food system has both adopted to and influenced the planet’s water cycle. Each system is a set of… Read more »

There are two contrasting approaches to understanding human being’s responsibility and capacity to change difficult social or environmental problems. One perspective places accountability on the shoulders of the individual; this is the idea that a single person has the power to make changes in their personal conduct that could alter the course of complex issues. In his essay on… Read more »

In 1966, James Brown belted, “This is a man’s world.” Although Brown’s simplistically chauvinistic, yet beautifully sung, words may not resonate with the contemporary listener, Mother Earth may have a considerably harder time dismissing the general concept. This thought can be daunting. On one hand, we are a product of this world, and on the other, we have shaped it…. Read more » 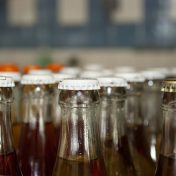 Michael Pollan’s In Defense of Food is no doubt an interesting read that pulls back the curtain on the modern world’s obsession with nutritionism.  He illuminates where the food industry has seemingly herded the masses into a rabbit hole of misinformation and reductionist thinking.  Pollan presents a solid argument into seeing food as a holistic, synergistic process that ties… Read more »