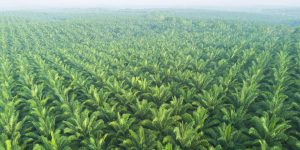 I enjoyed reading Karen Litfin’s work in “Thinking Like a Planet.” It goes along with some of the questions I have been asking about using Earth Systems to inform human systems, making them circular rather than linear. It was nice to see ideas and examples of how it is being done, such as virtuous cycles rather than vicious cycles. I thought much about the principles of Gaia in relation to the food/climate change connection in Indonesia.

One international problem associated with food/climate change is the oil palm growth in Indonesia. As we have learned in this course, through videos and readings, the palm oil industry poses many risks to climate change. First, rainforests are being cut down to make room for plantations, this produces CO2 emissions. Next, palms are being planted in peat. They take in CO2 from the atmosphere as they grow but emit it when harvested. Lastly, the plantation waste is burned. The peat which it grows in, which captures tons of carbon, burns as well and releases CO2 into the air.

Indonesia does emit lots of greenhouse gasses by their farming practices, but at the same time, they will be negatively impacted if the global temperature rises. Their impact per capita, when compared with developed countries is minuscule, yet they will be impacted pretty dramatically. In terms of adaptive capacity, it would definitely be harder to rebuild in Indonesia. I heard news a while back of entire islands in the South Pacific being sunk by rising sea levels, and this is something that could eventually impact Indonesia as well. It would be devastating to literally lose pieces of land, homes and livelihoods due to climate change.

In terms of a systemically informed response to the problem of deforestation and oil palm growth, I am not too sure. I think applications of Gaia principles would be beneficial, examining which circular systems have been disrupted and trying to remedy them, systems such as nature creating peat, rather than humans burning it. It is very important to stop further deforestation. Taking the time to remove the palm “waste” once everything is harvested and recycling back into neighboring jungles rather than burning it is another option to think systemically and try to maintain that cycle at least somewhat. Whereas the Earth may be able to stabilize itself if significant changes in global climate would occur, the world food system can’t make such a drastic adjustment in a short period of time. We need to be aware of our impact, not only on the climate, but of the ripple effects following that.

Litfin, Karen. “Thinking Like A Planet: Gaian politics and the transformation of the world food system.” PDF.