Effective irrigation is very important to efficient farming. Using too much water can carry off soil nutrients and fertilizer in water runoff. By using only enough water for the crop to grow, less fertilizer can be applied. There are some interesting alternatives to nitrogen based fertilizer being studied now. One of the ones I found most interesting was an experiment performed that integrated aquaculture and agriculture, using the same water to grow fish and crops in order to reduce the use of fertilizer. In the experiment, researchers used liquid effluent and sludge from raising fish as a way to replace fertilizer. Aquaculture is a growing industry in the U.S. and the use of what is normally a waste product in the production of fish and shellfish has the potential to offset some of the ecological damage of producing and using fertilizer. While setting up a fish farm on a crop farm in order to reduce fertilizer use probably doesn’t make sense financially in the short term, or at current fertilizer price levels, but it shows that alternatives are being developed with positive results. The key to widespread adoption of a fertilizer alternative is going to be when it makes financial sense. It isn’t enough that an alternative has ecological benefits, it needs to have economical benefits as well. 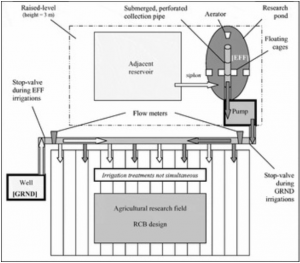