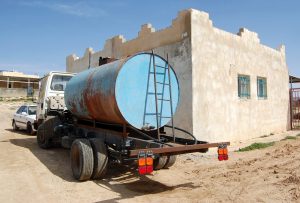 Several years ago, my brother was traveling regularly to Israel, Palestine, and the surrounding areas as part of a team working to research and advocate for the water rights of the Bedouin tribes. He was in law school, working with the Muslim Student Association on a project that I took very little interest in. Now I have an entirely different perspective, and interest, in his past work. Water is required for life, yet somehow, it is treated as a commodity, traded to the highest bidder.
I was especially intrigued by the resources that centered around India, the NYT article and Anupam Mishram’s TED Talk. It seems clear that those in rural areas are being denied their right to water as “a result of years of mismanagement of water resources, a failure to crack down on corruption and dithering by Prime Minister Narendra Modi’s government on taking action to help those affected” (NYT). The limitation of water collection in traditional ways, restricting access to those communities, has social, cultural, ecological, political, agricultural, and technological ramifications. Water, and the rights of it, is integrated within all systems — because it is the one thing that humans can control that is required by everyone and everything in life.

1 thought on “The Right to Water”