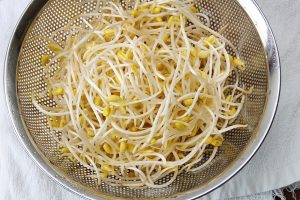 During my first time in college, I used to work odd jobs to make ends meet. One of those jobs was driving a delivery truck delivering soy bean sprouts. I had no interest in, nor had I ever heard of the term “hydroponics,” until I took a vacation to Disney World last year. Inside Epcot Center is a ride called “Living With The Land” which has a section which shows hydroponic farming. It was only then that I put two and two together and realized what an amazing operation I had been working for years ago.

The soy bean sprout farm I used to work for was owned by my father’s friend. Both my father and he were from China. My father was a chef at a Chinese restaurant, and his friend delivered bean sprouts to the restaurant my father worked at. When times got busy, I was recruited to help out. The first time I visited the farm, I remember being overwhelmed by the maze of pipes, trays, buckets, and water everywhere. What I didn’t appreciate at the time was a homemade operation which recreated a Chinese technique he had brought over from China for growing soybean sprouts. Over time he would make better and better bean sprouts by refining the technique. The result were bean sprouts that had specific characteristics that all the restaurants in Chinatown sought.

All bean sprouts are not the same. Tossed in a wok with chili oil, beef, and onions, you can hardly taste them, but chefs can tell the difference. From what I’ve been told, it’s how the bean sprouts complement the other ingredients in the dish that set it apart from the others. I really wish I had taken the time to really learn the details of the operation. How could one small company fulfill the needs of so many restaurants at once? The bean sprout farm has long closed down, the farmers have moved onto other jobs, and several new Vietnamese bean sprout farms have filled the market vacuum. The secret to those special bean sprouts my dad’s friend made are gone.

Fast forward to this quarter and during the course of the reading assignments I ran across the idea of hydroponics again so I wanted to share my “aha” moment. My “aha” moment began around week 7 but fully materialized at Lisa Hamilton’s “Linux for Lettuce” article, where we learned how farmers were trying to advance their seeds by adopting an open source distribution system. It was then that I thought about how specialized farming techniques, especially very obscure ones like the ones for those Chinese bean sprouts, are being lost. Industrial farming, and a generation that is more interested in higher paying, more prestigious jobs spelled the end of the bean sprout farm I worked at. In some ways it is reflective of what’s happening on a larger scale in the world food system today. Some of those lost techniques might have even contributed to helping the impending world food crisis but we’ll never know. I still believe that GMO’s have a part to play in helping to secure the world’s future food needs, but for the first time, it made me think at what cost. What are we losing and what have we already lost? The next time you eat at a restaurant in Chinatown, just know that what you ordered is ever so slightly worse than it was 15 years ago, just ask the chef.

Kongnamul_(soybean_sprout)_2 By Hyeon-Jeong Suk [CC BY 2.0 (http://creativecommons.org/licenses/by/2.0)], via Wikimedia Commons