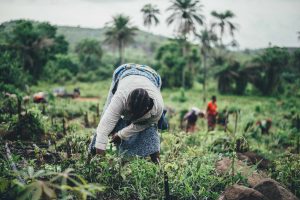 As we proceed further into the Anthropocene, we are entering the unknown as a planet. Many aspects of our world are behaving less predictably than ever as a result of human impact. Shocks to the complex global food system can come in many forms, from natural disasters to world trade disputes to pest outbreaks. How resilient is our food system, and can it feed everyone in its current state? Even if we solved problems of distribution and waste, can we expect to increase yields from our exhausted soils? Have we already reached “peak food”?

Scientific and technological advances have allowed us to grow enough food to sustain a massive population, but there are demonstrably dire consequences to industrial food production practices. Petroleum is integrated into practically every step of the food chain – if we’ve already reached peak oil, peak food can’t be far behind. Organic farming practices have proven to be more environmentally impactful than conventional methods (along certain measures). We’re depleting our aquifers beyond the point of renewal. The push to expand the agricultural frontier to feed growing populations drives deforestation and degradation of ecosystems in developing countries. Financial incentives for export monocropping are hard to ignore for the world’s farmers. As the Western Diet spreads across the planet, demand for meat and dairy is on the rise, increasing the need for feed inputs.

The troubling realities that we face must be met with massive effort on scales from local to global. On that note, I’m rather pessimistic about likely outcomes in the face of political and economic forces. Historically, world trade relations have favored wealthy nations at the expense of the global poor, a fact increasingly compounded by the triple inequality of climate change. I believe it will take intense and collective public pressure to urge nations to behave equitably and responsibly regarding regulation in trade and environmental impact.

Hunger, famine and starvation have persisted, unsolved and unchanged, throughout human history. Until they reach one’s own doorstep they are easy to accept as unfortunate, yet remote, facts of life. Living systems theory tells us otherwise: what we eat is the result of a complex network of interactions, and our choices and practices may have far removed impacts. If we accept that we may have already reached “peak food,” we must examine and change our practices across scales, finding opportunities to make the most of what we have left. My hope is that people can unite in raising awareness and uniting to challenge the powerful forces that perpetuate an unsustainable food system.