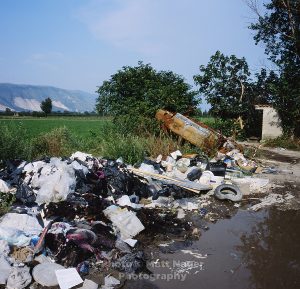 A burned out car and piles of illegally disposed computers, trash, and toxic chemicals lie abandoned next to farm land near Marigliano, Italy. While organized crime can blamed for much of the illegal toxic waste dumping from Italian companies, local citizens have, as well, become accustomed to illegal dumping of waste leading to further contamination of the countryside.
PHOTOS/ MATT NAGER

Let’s talk about the water where I live in Naples, Italy. I am an American military spouse and living in Italy because my husband is stationed in Naples. Every year the US Navy does a test on the quality of tap water on the US military base. The report is called, U.S. NAVAL SUPPORT ACTIVITY NAPLES SUPPORT SITE – GRICIGNANO – 2017 DRINKING WATER CONSUMER CONFIDENCE REPORT, and the results are published to the public. The report states that the water is ‘fit for human consumption’ or potable. While this may be true there are still many toxins found in the water including chlorine, copper, fluoride, lead, nickel, sulfate, etc. But still, families that live on the military base are assured that their drinking water i.e. tap water is safe for consumption.

However, the US military families that live off base are actually supplied bottled water by the US government every month and advised against drinking the tap water out in town. Each household gets 2 liters of water per person per day. While I haven’t seen official reports of the Naples, Italy public water, the action by the U.S. government giving bottled water leads me to believe that the tap water off base has more contaminates then the water on base. When you go to a restaurant in Naples, Italy and ask for water you will get bottle water that you pay for. There is no such thing as free tap water here at a restaurant.  But what about the residents of Naples, Italy that can’t afford to buy bottled water? These people are suffering the environmental impacts the most because of their low income.

The local residents of Naples are receiving unequal exposures to environmental pollutions because of their economic standing. And me as an American, even in a foreign country, is still benefiting from the political ecological power that America has as an affluent nation. One reason that the water in the Campania region of Italy including Naples is contaminated is because there is a major garbage disposal problem. The garbage, when not disposed properly, get into the water, soil, and air. So many factors lead to people in Italy and other countries of the world not being able to get clean drinking water: cost, contamination, availability, income level, location, etc. While there isn’t a water scarcity problem here in Naples there is a water pollution problem effecting the poor the most.