In Defense of Food, by Michael Pollan, outlines the best ways for people to eat for both their own well-being and the well-being of the planet. His encouragement of a change in personal habits (in this case food habits) is very much a microcosm of modern environmental and food movements.

Pollan’s individualistic approach to the way we eat and interact with food is narrow-minded, to say the least. Furthermore, the solutions he offers are, by no means, feasible for everyone, he instead focuses on means of action for the upper-middle class. He speaks of eating locally sourced food and buying more fresh produce, activities that are far easier for those who have enough time and money to turn fruits and vegetables into meals. Moreover, for those who can’t afford the time or money to cook these meals, he doesn’t provide another way forward. He addresses income inequality and injustice in the food system briefly, but fails to offer means of remediation to the food system for those affected by said inequality and injustice.

“Taking Back a Little Bit of Control”, a study done by MacKendrick and Stevens, better illustrates how removed people really are from environmental issues. The idea that change will come in the form of consumption and the apathy towards what we cannot easily change are, together, indicative of a problem that will not be resolved with a change in diet or lifestyle. Though some action is better than none, individual actions alone will by no means fix the problems that plague our environment and food system. When we blame global warming on people that don’t recycle, people that don’t have reusable bags, and people that don’t drive electric cars, we absolve bigger institutions and corporations of their own shortcomings in the realm of environmental consciousness, the impacts of which are often felt far more than any plastic water bottle that failed to find its way to a recycling bin. 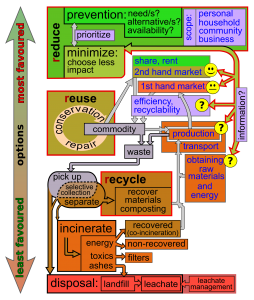 Green consumerism encourages increased consumption of goods, just because they’re “better” for the environment. However, many people fail to recognize that things that are “better than the alternative” are not necessarily “good” for the environment. Furthermore, “green” products are often just a ploy by businesses to find another way to profit. Companies will spend money advertising their new “green” product, but that money could have been spent buying carbon offsets, or finding ways to make their production process less water intensive, or almost anything else. These companies don’t care about the environment, but they know that people who do will make them more money.

Environmentally minded organizations are partially to blame for this. Individuals can often do little more than donate, buy ecologically friendly products, or contact representatives; it’s no surprise that they feel that their best means of enacting change is with their dollar. I don’t think real and effective change can happen at the individual level, but I also don’t think corporations will ever truly put the well-being of the planet ahead of their profits; for this reason, I don’t necessarily know what the best way to move forward is, but I’m nearly certain it’s larger than hybrid cars and recyclables.