Imagine a raisin. Dry, wrinkled, brown, devoid of life and vigor. What was once a plump, robust grape is now a shriveled, mass-produced food product; a representation of the industrialized agricultural system of the modern world. As I held this microcosm of the industrialized food system on my tongue and closed my eyes, I began to think about how this… Read more »

Realizing as a society that global concerns currently being dealt with are truly connected will be key in fixing our eventual food and water crisis. Contemplative practices have enlightened me on issues such as world hunger and helped give an appreciation for the amount of energy it takes just to get food to the table. Nonetheless, I couldn’t fully integrate… Read more »

I have written a few contemplated reflections before, but this class’s focus on fossil fuel contemplation has really caught my attention. There are many talks right now about substituting fossil fuel with electricity as vehicles’ main source of energy. The rise of electric cars, especially the Tesla models, is an example. Although electric energy is usually viewed as a clean… Read more »

One of the many problems resulting from the state of our current food system directly impacts human health. Pollan claims to offer a simple solution however it is exclusive, many socio-economic barriers render people incapable of practicing his three rules. Furthermore, the rules he lays out are trivial when situated in the modern-ecological context, post-agrarian-revolution and post-industrial-revolution. Revolutions bring with… Read more »

My mother and I would yell about the compost while I was growing up, quite literally scream at each other over an apple core.  But before that apple was bit into, eaten, and mistakenly sent to the landfill rather than our compost bin, the question was had I washed it or not?  Because “Yes Willa I always buy organic apples,… Read more »

Michael Pollan states in his book In Defense of Food “Health is, among other things, the product of being in these sorts of relationships in a food chain…if the soil is sick or in some way deficient, so will be the grasses that grow in that soil and the cattle that eat the grasses and the people who drink the… Read more » 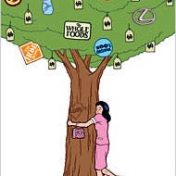 Sociology professor Andrew Szasz came up with the term “inverted quarantine” to describe people who seek to isolate themselves from exterior ecological threats by way of individualizing environmental responsibility. Similarly, according to Michael Maniates, Americans think that the environment can be spared as a result of smart consumer action done by individuals. Such an idea is also the main focus… Read more »

In Defense of Food, by Michael Pollan, outlines the best ways for people to eat for both their own well-being and the well-being of the planet. His encouragement of a change in personal habits (in this case food habits) is very much a microcosm of modern environmental and food movements. Pollan’s individualistic approach to the way we eat and interact… Read more »