Hunger is a biological state that practically all humans experience in their lifetime, to varying degrees. In contemplating the experience of hunger, I was struck by the universality of the sensation. It is an issue that has persisted, unsolved and unchanged, throughout human history. On a global scale, an overwhelming range of complex forces and feedback loops are at work in… Read more » 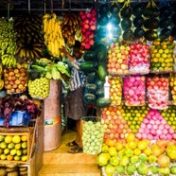 As someone who enjoys cooking, it is easy to get inspired to try new dishes, come up with new combinations, and try exotic food (i.e. tropical fruits, “strange” vegetables, new meats, etc.). Eating seasonally and locally can be a challenge when one is inspired to cook. Whether I am following a recipe or making one up as I go, cooking… Read more »

My toddler son loves raisins. They’re in the local, organic, gluten-free granola he eats every morning. He often picks out every one with his index finger and thumb, savoring (inhaling) them with a huge smile on his face before begrudgingly eating the reminder of his oats once he’s exhausted the daily raisin supply. I keep a jar of organic California… Read more »