An advertisement for Meatless Mondays during WWII. 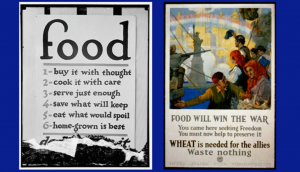 In his book, In Defense of Food, Pollan describes nutritionism as a shift “from eating food to eating nutrients” and to help define it, he quotes Marion Nestle, another author, “[nutritionism] takes the nutrient out of the food, the food out of the diet and the diet out of the lifestyle.” Pollan believes that the shift towards eating nutrients has distanced eaters from the source of their food and has created a relationship between people and nutrients rather than people and food itself. Chicken breast has been reduced to its molecular make up of protein. This distances the eater from their food because that chicken breast is no longer acknowledged as a once living creature that had to be raised and cared for by farmers, but is simply protein instead.

Pollan’s solution to nutritionism is to encourage consumers to purchase foods from farmers markets, and local farms. This, of course, is easier said than done for whole foods are significantly more expensive than the processed packages that are accessible in grocery stores. Therefore many Americans don’t have access to the foods that Pollan suggests.

Instead, a solution that reduces the cost of whole foods and aims to reconnect farmers, their products, and the consumers must stem from the Agricultural system of the United States.

This graphic depicts how the nutrients of certain meats become important, rather than the animals themselves.