For our Group Action Project, we wanted to host a public screening of the documentary Queen of the Sun: What are the Bees Telling Us? on the HUB lawn one evening so that people could become well informed on the issues surrounding Honey Bees while also enjoying a nice evening outside! We had partnered with the University of Washington’s Beekeeping club so that they could set up a table at the event and sell their honey, answer questions about Honey Bees, and spread their mission statement. Unfortunately, we ran into some technical difficulties and had to host the screening inside on a different date than originally planned.

Queen of the Sun: What the Honey Bees are Telling Us is exceptional because it gives viewers an insight into how Honey Bees are can be used as a warning sign about the issues that are stemming from the industrialized agriculture system. Gunther Hauk, a biodynamic beekeeper who is featured in the documentary, touches upon this idea as he says, “Colony Collapse Disorder is the bill we are getting for all that we have done to the Bees… I am grateful for this crisis. It will give us the possibility to learn something, if we are willing… their crisis is our crisis.”  We have ignored the health of the Honeybees as we have shifted into an industrialized system and the Honey Bee crisis we are now facing is karma for our ignorance. Colony Collapse Disorder is not only a wakeup call to how we should treat Honey Bees, it is a wakeup call to how we should treat our entire system of agriculture. The current system within the United States relies on the exploitation of the Earth and its farmers in order to produce high yields. The collapse of the Honey Bee population represents the possible collapse of the current unsustainable system that excels off of the exploitation of land and people. Colony Collapse Disorder is a massive warning sign, screaming to us that the current system of production is going to fail. If we continue to treat the Earth, specifically the agricultural sector, with the mindset of producing quantity without recognition to the consequences, we are going to face a crisis similar to what the bees are facing now. 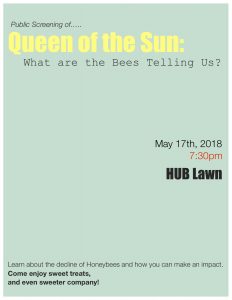