For our action project, my group and I focused on food waste, as it is a very prominent problem in the world food system. We wanted to tackle this problem both locally and globally to inform the public on what food waste is, how it is a problem, how it impacts the global community, and how students can take action to address this issue. My group and I decided that the best way to do this would be to interview professors, students, and organizations to create a video we could post on YouTube to bring it to a global audience.

Many first world countries such as the US produce mass amounts of surplus food which end up getting wasted. Carolan stated that the US wastes anywhere between 33 to 50 percent of the food that is produced annually (p.126). This is a huge problem especially because developing countries across the globe struggle to find food daily. Food waste happens in all countries although, the amount lost and where a majority of these losses occur depend on the where in the world you are focusing on (Carolan, p.128). Below is a picture that displays this. 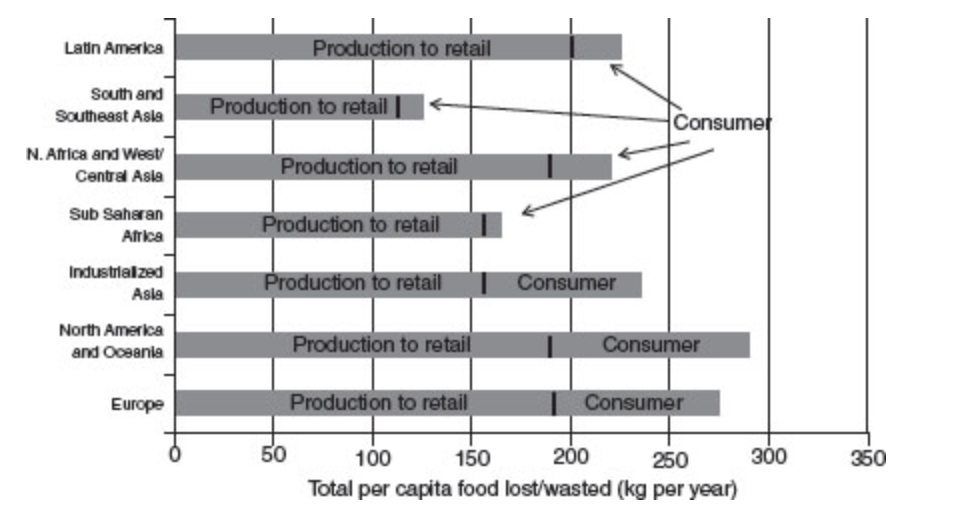 So why does so much food waste happen, especially in the US? In the beginning of this class we talked about the industrialization of the food system and I would say this is partially to blame for how much food waste the US produces. We have a food industry that wants to produce as much food as they can for the lowest price possible. This is partially due to our capitalist economy. Sometimes this food does not even leave the farm because it does not look right and therefore cannot be sold in stores. We do not distribute this “ugly” food, instead it goes straight to the landfills or left in the field to rot. Also, around the 1970s, the concept of nutritionism came into play which further increased the over production of food. New ways to produce certain foods with more nutrients encouraged more production. Pollan stated, “traditional supermarket foods were steadily being replaced by “nutrients,” which are not the same thing” (p.19). These new foods such as processed foods started taking over the shelves of the grocery stores. These are just a few reasons why the US wastes so much food. It is also important to look at this issue from a global scale.

Here is a link to our video if anyone is interested: