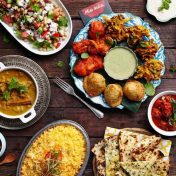 At the end of lecture one day, Professor Litfin gave a single raisin to each student to suck on as we learned about the lifetime of the seemingly simple food. From the time the grape was planted, to it being dried out and transported to stores, we thought about it all. For me, eating food is part of my daily… Read more »

In the 1940s processed foods began their rise to prominence in the American diet. Foods that used to be too expensive for the average consumer suddenly became readily available to them. Although Americans were better able to feed themselves, rates of malnutrition and other new illnesses began to rise. To combat this, producers started supplementing their nutrient stripped foods with… Read more »