Due to my experience growing up in the emerging fast food industry period in Vietnam. Nutritionism is not only the problem in the United States but also in developing countries, Southeast Asia, Vietnam.

Recently, Vietnam’s first McDonald’s restaurant officially opened in 2014, a vast of people lined up to try the most iconic American meal. The McDonald restaurants also offer McPork to carter to Vietnamese taste. How wonderful it is! 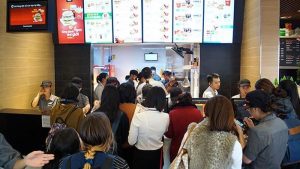 The first McDonald’s brand open in Ho Chi Minh city, and people wait in a queue, up to 1-2 hours to try the most iconic American meals. Source: Vietnamnews.vn

In the book In Defense of Food by Michael Pollan addresses the nutritionism in the United States. Hence, the growth of Western fast-food chain is predictable that the nutritionism will be a problem in Vietnam, whether Vietnamese will be eager to substitute for the culinary classic such as pho and banh mi with Big Macs and McPork. However, I hope I won’t be considered presumptuous when I said the growth of fast food restaurants contribute to the rising of obesity, diabetes, and other diseases diet-related in Vietnam. 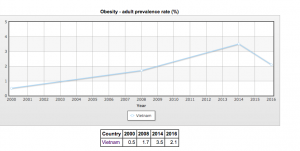 Coincidently, the prevalence rate suddenly peaks in 2014, when the first Mc’s Donald established in Vietnam. Even though Vietnamese government has taken action aim at obesity intervention, it is not effective. Historically, after so many decades fighting famine, medical staffs and policymakers have no prior experience in treating over-nutrition diseases, as well as financial unstable in health care system. However, responding individually to the obesity crisis without solving the problem from the roots is a temporary solution. In the fight against obesity, offering obesity/ diabetes training program in treating diseases for medical personnel and patients to follow the treatment plan, stabilize health care budget to provide insulin treatments, and using social media as a useful tool to increase people awareness. Thus, everybody needs to come together, engage, and fight to obesity-related illness. It is not too late for Vietnam to say no.