In ENVIR 385, I was tasked with working on an action project that would represent a response to the course topic of politics and the global food system. Our group decided that we wanted our action to center around the intersection between domestic food and agriculture and immigration. So, we chose a two prong approach to spread awareness about the… Read more »

The piece of our group project that I believe was most essential to our learning was our team’s willingness and ability to communicate with one another. While this strength may obviously be conducive to the success of any group work, I began to consider how naturally impossible and frustrating it is to tackle any environmental cause when the relevant relationships… Read more » 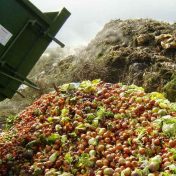 For our group action project my group tackled the problems of food waste. Food waste starts at on the farm, where almost 7% (est 1.3 billion pounds/year which is about 1 trillion dollars in lost food/year) of all food that is grown goes unharvested (Foodtank). Next it is transported to markets, where it may go bad during transportation or while… Read more »

Final blog post – wrapping it all up Food will be the next major global conflict. It was cause security issues in the form of mass immigration. We do not see these issues of massive hunger and mass immigration now because it is being suppressed. It can be overlooked by wars or completely ignored by government suppression of news. Our… Read more »

When you hear the topic ‘trade,’ what do you think about it? Do you think that trade is not a familiar topic for you? Our group and I made a podcast about food trade as our action project. We invited two speakers, Stan Sorscher, who is from Washington Fair Trade Coalition and Joseph Maurey, who is Husky Grind and UW… Read more »

The group I was in collaborated to address the issue of food accessibility. Food accessibility is a huge issue to tackle in just a few weeks, initially I had a hard time applying a global framework as I couldn’t ignore the impacts of food inaccessibility felt locally in the University district and greater Seattle area. I came across a tri-campus… Read more »

The group action project this quarter is perhaps one of the most salient learning experiences I’ve had at UW.  And this is most likely because, by most standards of effective collection action, we failed.  The movie I found, “We Feed the World,” is a film that so effectively summed up many of the topics we discussed in class that many… Read more »

I was very nervous going into this project. I would go so far as to say I was dreading it because 1) taking action sounds like a big, time consuming idea, 2) I had little idea what a project on “movements” would entail, and 3) I generally am screwed over by group projects. However, I come out the other side… Read more »