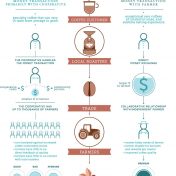 Many college students may feel disconnected with the topic of trade because of their perceived inability to influence it. However, our project demonstrates that there are many ways, in which students can get involved locally to influence this global issue. Specifically, we utilized a forum in the format of a podcast to proliferate the knowledge we gained in our discussions… Read more »

When you think of products you purchase at stores you do not really think about where the actual ingredients come from but instead you just think it comes from just a factory. But the ingredients that are used to make these refined goods come from all around the world. Professor Liftin had us participate in a contemplative practice where we… Read more »

President Trump has recently been considering the possibility of a U.S. involved Trans-Pacific Partnership (TPP), which has surprised many domestic and international actors. Initially, Trump determined that the deal would hurt American farmers, but now that the U.S. is on the brink of a trade war with China, he feels pressure to reevaluate the TPP: “the president started to change… Read more »